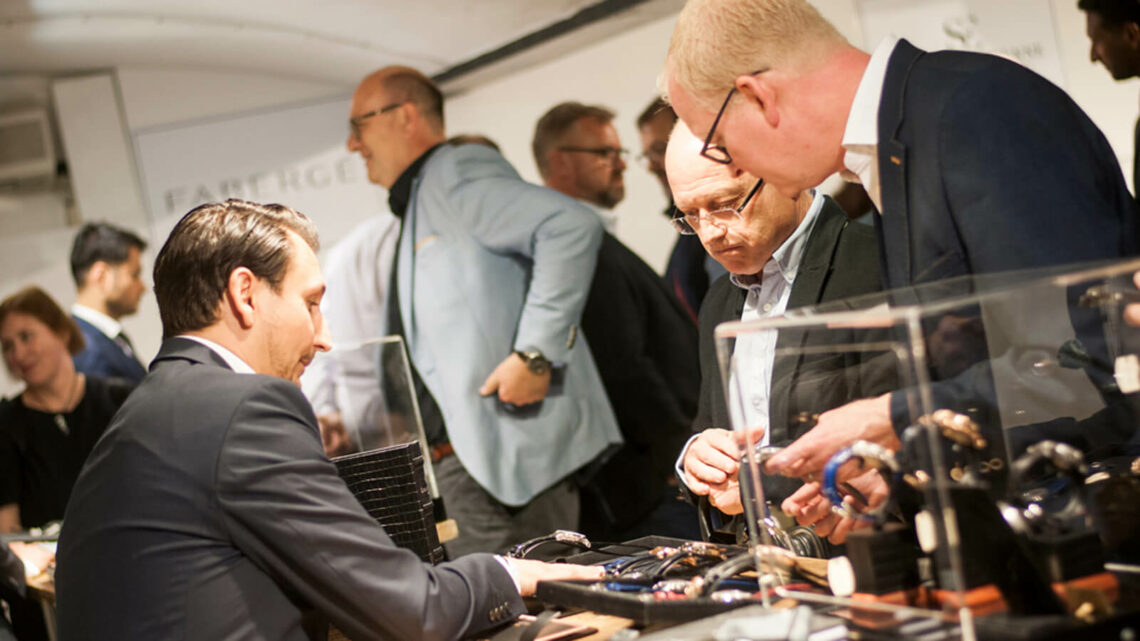 “There is no life I know

To compare with pure imagination”

Carl Eady recounts his experience at The Watchmakers Club event 5th June 2019. In this feature he looks at an array of watches including some exquisite timepieces from Armin Strom, Cyrus, Czapek, Fabergé, Fears, Garrick, GoS Watches, HYT, Louis Moinet, MeisterSinger and several more. Back in 1971, the fabulous Gene Wilder brought Roald Dahl’s most famous hero to life in the endearing classic ‘Willy Wonka and the Chocolate Factory’.  As Mr Wonka led the golden ticket winners through his magical factory to the tune of ‘Pure Imagination’ their faces lit up in amazement.

There was a comparable look of wonder among many attendees at the recent ‘Watchmakers Club’ event in London, as enthusiasts, collectors, journalists and bloggers came together to delight at the imagination and expertise of some exceptional independent watch brands. The brainchild of David Brailsford, entrepreneur and owner of British watch brand ‘Garrick’, the event started life in a pub in 2015 as ‘The Night Before’, an informal gathering of watch fans and independent brand owners.  Nearly five years later it represents one of the UK’s best horological events, and was admirably supported by Pietro Tomajer and his luxury retail business ‘The Limited Edition’. At a time when a number of high-profile luxury maisons are facing commercial challenges, it appears that the world of Independent watchmaking is in rude health.

Eighteen exceptional brands exhibited over two floors, with representation from Swiss, German, Swedish and English brands. A sense of community pervaded the exhibition space. Indeed, it was refreshing to witness independent watch brands from different nations getting along when in the outside world political tensions proliferate.

On entering the doors of ‘Unit 6’, a contemporary art gallery in Covent Garden’s Langley Street, first time attendees will have been pleasantly surprised at the openness and warmth exuding from the brand owners and how ‘hands on’ time is actively encouraged, rather than frowned upon. The atmosphere created here is far removed from the ‘distance’ some feel when attending Baselworld and SIHH public days.  David has clearly thought about the needs and desires of the brands, potential customers and the press community alike.  Photography lightboxes on each floor were in near constant use as bloggers and journalists delighted in snapping material for their publications and social media accounts. Flying the British flag were two exceptional English brands.  Fears watches, owned by archetypal English gentleman Nick Bowman-Scargill, proudly showed its hand-made and elegantly understated timepieces, such as the curvaceous cushion cased Brunswick.  With a china white enamel dial and skeletonised hands, it is a lesson in pure simplicity.  At the adjoining stand, event host David Brailsford and English Master Watchmaker Simon Michlmayr proudly showed off their latest creation, the frankly stunning Garrick ‘S2’.  Its gorgeous engine turned dial has a large open aperture at 6 o’clock to display the hypnotic in-house free sprung balance. Faceted blued hands reach out to the applied heat blued steel chapter ring to stunning effect.  Garrick’s respectful delivery of the finest finishing techniques is proof indeed that the swiss are not the only purveyors of Haute Horlogerie. A brand which has a unique take on displaying time is MeisterSinger from Germany. Founded by Manfred Brassler, the company’s minimalist timepieces use only a single hand to convey the hours and minutes.  By using double digits for numerals, the aesthetics are wonderfully balanced and reading the dial soon becomes second nature.  On display from this Münster-based manufacturer was the latest creation, the ‘Vintago’.  Between 2 and 4 o’clock is a simple but effective date function displayed on an arced aperture under a domed sapphire crystal. This might seem a small detail, but it is sure to be one which will delight MeisterSinger’s fans.  Using a highly credible Sellita automatic movement, these pieces also come with a very pleasing price tag. Scandinavia is not traditionally known for its watchmaking, but Swedish Master Watchmaker Patrik Sjögren has created a completely unique design language.  Deriving inspiration from Nordic seasons, Scandinavian nature and Viking history the GoS collection often sports dials forged from uniquely patterned Damascus steel.  Two standout pieces Sjögren was proudly displaying were the ‘Glacier’ and ‘Sunset’ editions of the Sarek collection.  The exquisite Mother of Pearl dials in red and icy blue are translucent enough to allow light from a Super-LumiNova plate beneath to emanate through to stunning effect, even in very low light. In 2015, Swiss brand Czapek was reignited by the charismatic Xavier de Roquemaurel.  In just four years the company has delivered a stream of watches that would undoubtedly have delighted François Czapek, the founder of the eponymous company. In the somewhat contemporary space of Unit 6, the breathtaking ‘Place Vendöme Tourbillon’ garnered much interest with its one-minute suspended tourbillon, dual time and day/night display.  This year’s Basel release, however, the ‘Faubourg de Cracovie Tao’ was even more arresting.  Stunning white enamel dials are nothing new for Czapek, but in order to achieve the ‘panda’ look, the sub dials have had to be black enamelled separately, then seamlessly welded to the main dial. The result – a gorgeous proportioned and balanced dial estate to accompany the ‘fleur de lys’ hands and long elegant Roman numerals. Powered by a 5Hz Vaucher movement with column wheel chronograph and vertical clutch, one wouldn’t be surprised if it achieved another GPHG award for the marque. Andreas Strehler is one of the worlds most respected watchmakers and has been exhibiting with The Watchmakers Club since it’s inauguration.  Through his company UhrTeil AG, Strehler develops complications and complete movements while also playing troubleshooter for many players in the watch industry. The technical brilliance behind his own work is astounding.  Among some exceptional pieces was a bespoke collector’s version of the ‘Sauterelle à heure mondiale’.  Its familiar yet intriguing remontoir d’égalité at 10 o’clock is used to charge the escapement with the exact same amount of energy every second, ensuring the highest levels of accuracy.  Strehlers wizard-like mastery of all things horological and his mechanical expertise have earned him a rightful place in the very top tier of the entire industry. What is evident is that to survive in today’s horological environment, brands not only need excellent standards, but also a point of differentiation. QLOCKTWO’s ingenious approach is to display the time through words displayed on a watch or clock face.   At first glance, one sees nothing more than a matrix of randomly arranged letters, but at the touch of a button the time, in words, is revealed.  Fresh from receiving a prestigious Red Dot design award, QLOCKTWO’s clocks and watches are always great conversation starters. Another Red Dot winner this year was Armin Strom exhibiting its Dual Time Resonance: Masterpiece 1. The white gold oval shaped case displays two gorgeous guilloché watch faces, each with its own power reserve, separated by a 24-hour indicator.  It is the two counter-oscillating balances which pulsate in a soothing unison which is this timepiece’s standout feature and one which the brand is now synonymous with.

For the more conservative audience, Zeitwinkel is a wholly independent brand which has been on the scene since 2006.  The brand is renowned for being a Master of clarity, a fact reinforced by the rhodium plated face on its latest ‘188°’ small seconds.  The outward simplicity of this company’s timepieces belies the stunning decoration of the in-house movements which warrant very close inspection and were the subject of many a conversation at the event. Last, but certainly not least on the top floor, was Cyrus.  The brand’s ‘Klepcys Vertical Skeleton Tourbillon’ was one of the stars of the event.  Limited to 5 pieces, this is a watch that always gets a second glance as it is so unique. The retrograde hours and minutes are both noteworthy, as is the skeletonised face revealing some of the 300+ parts of the Swiss movement, however, the dominating bridge housing the vertical tourbillon gives this piece its unique presence.  It is without doubt visually striking as it allows so much of the design and tourbillon construction to be seen. This is something that just wouldn’t have been possible had a more conventional approach to design been employed. On the lower floor of Unit 6, the brands on display were equally exhilarating. Perhaps the most intriguing and unique of all manufacturers exhibiting was HYT.  Since 2012, the brand from Neuchâtel has been combining traditional watchmaking techniques with fluid dynamics to stunning effect.  The hours being expressed by pumping liquid (one clear and one coloured) via a special glass capillary. As the hours flow, the coloured liquid is propelled around the perimeter of the watch, as fluidly as time itself. Whilst it is not their latest creation, the sheer attitude and boldness of HYT’s Skull collection resonates with those of a more rock’n’roll nature.  It was ‘H0’ series which really caught my eye, though. At 48mm in diameter, the box-domed sapphire crystal showcases HYT’s stunning creativity.  A small seconds indicator over-laps the minute dial, but that’s as conformist as HYT get.  The application of Super-Luminova means that in low light, this space age mechanical masterpiece wouldn’t look out of place in a Tron movie. Next to HYT was high end independent brand Louis Moinet.  Headed by CEO and Creative Director Jean-Marie Schaller, the company’s timepieces are a combination of mechanical art and Haute Horology. They are inspired by one of history’s greatest ever watchmakers, Louis Moinet, the inventor of the chronograph (1816). Multiple high-end pieces were exhibited, including the ever popular ‘Memoris’ equipped with the brand’s Calibre LM54.  With many of this movement’s 302 parts on display, including the distinctive column wheel at 12 o’clock, this mono pusher chronograph has long been a favourite with the brand’s many fans. Garnering most attention, however, was the Sideralis Evo White Gold.  Two mesmerising oversized inverted tourbillons power the Sidereal time display which features a dial with a hand-painted aventurine view of the cosmos.   As it rotates, an aperture in the dial reveals views of the Moon, Mercury and Mars – all hand-painted and incorporating actual dust particles retrieved from recovered meteorites. Whilst this area of the market has traditionally been a male preserve, luxury maison Fabergé brought elegance and femininity to the event.  In 1911, the ‘Winter Egg’ was created by Peter Carl Fabergé for Tsar Nicholas II to give to his wife Tsarina Maria Feodorovna.  The egg was the inspiration behind an exquisite member of the Lady Compliquée collection, the Lady Compliquée Winter.  In another avant-garde approach to design, the hours are indicated by means of a rotating mother-of-pearl bezel, while the minutes are indicated with the blades of a fan, opening progressively through each hour before resetting to zero.  The mother-of-pearl dial mimics an icy blue glacier, completing a stunning look worthy of royalty. Every brand in attendance brought watches of great merit and the organisers clearly made every effort to ensure a broad spectrum of tastes were catered for.  For those with a desire to practise their watchmaking skills, there was even the chance to experience watch finishing first-hand, thanks to London based ‘International Watch Seminar’.  The firm run a 2-day course where enthusiasts can experience hand finishing techniques such as ‘snailing, ‘Côte de Genève’ stripes and ‘perlage’ before assembling their own personalised watch with an ever reliable Unitas 6497 movement.  I accepted their kind…